Many species of wild birds can be found in Disney. Below are some of the most noticeable.

We’ll start out with the White Ibis. Most visitors will encounter this memorable bird at outside eating areas. They can be very tame and quite bold; looking for table scraps and fallen food items. I like to think of them as Florida’s pigeons.

You may also notice them when they head to a tree to roost at night. The tree will be adorned by dozens of white sleeping blobs.

A word about feeding birds: Wild birds are smart. They are at the parks due to habitat and food. Many were first attracted due to the easy availability of dropped food. Aggressive birds arise from people feeding them. This can be entertaining for many, an annoyance for others, and scary for some. It's best not to feed the birds. On the flip side, leave the birds and wildlife alone. I have seen too many kids trying to attack wildlife. It's disturbing to think what this leads to later in life.

Mallard – the common duck at Disney, besides Donald and Daisy. Found anywhere there is water, (including swimming pools!) and in the parks or bus stops looking for free handouts.

Most North American ducks do not make it this far south in the colder months; November - March. But for the ones that do you will most likely find Hooded Merganser or Ring-necked Duck on resort ponds.

Wild Turkeys might be found in the more wooded resorts such as Fort Wilderness. 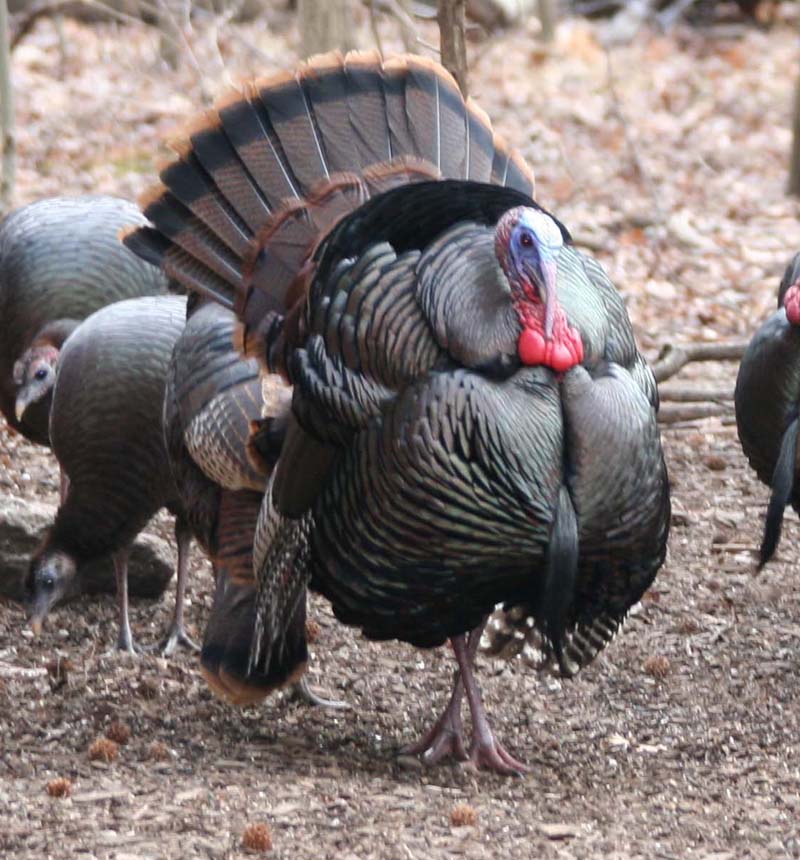 male Wild Turkey displaying with females in the back

Most people think the Pied-billed Grebe is some sort of odd duck, but it’s a grebe. They can be found on the ponds and lakes with numbers increasing during the winter months.

The Wood Stork is a threatened species and Florida is the most likely state in the US to find him. Not common, he might be found in the secluded ponds that you pass by on your way to and from the parks. 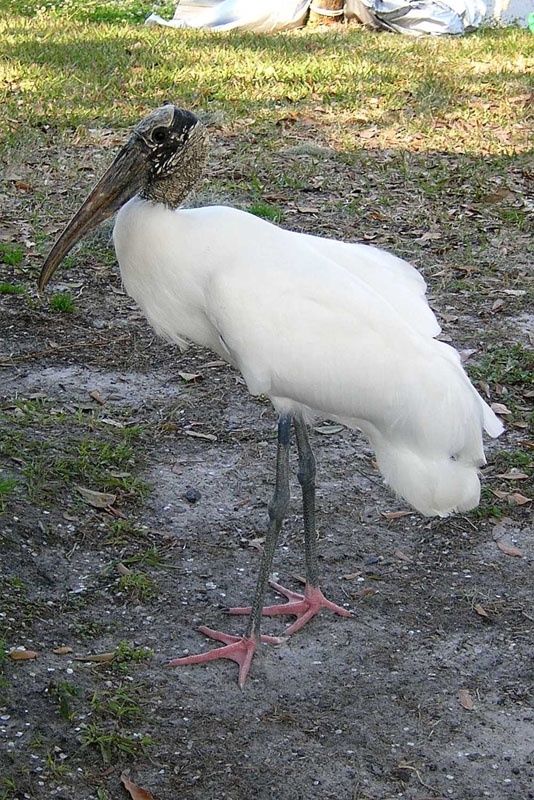 Double-crested Cormorant and the Anhinga both like to swim under water and catch fish. But their wings are not waterproof like a ducks. They may be found drying their wings on docks or the edge of the water.

Florida abounds with egrets and herons. Most will encounter a Great Egret, a tall all white bird that can even be found atop a Turkey Leg kiosk in the Magic Kingdom or at the resorts, prowling the bushes for lizards to eat. A few are likely to be present in any body of water. They have yellow bills and black legs and feet.

The Great Egret is not the only slender all white bird you’ll find. Snowy Egret, Cattle Egret and immature Little Blue Herons (all white when young) may also be found.

The darker herons include the 4 foot tall Great Blue Heron and the much shorter adult Little Blue Heron. Occasionally a Tricolored Heron (aka Louisiana Heron) can also be found

Tricolored Heron atop the Lego serpent at Disney Springs

The small Green Heron is most often found at Epcot, especially the water area between Mexico and World Showcase Plaza. 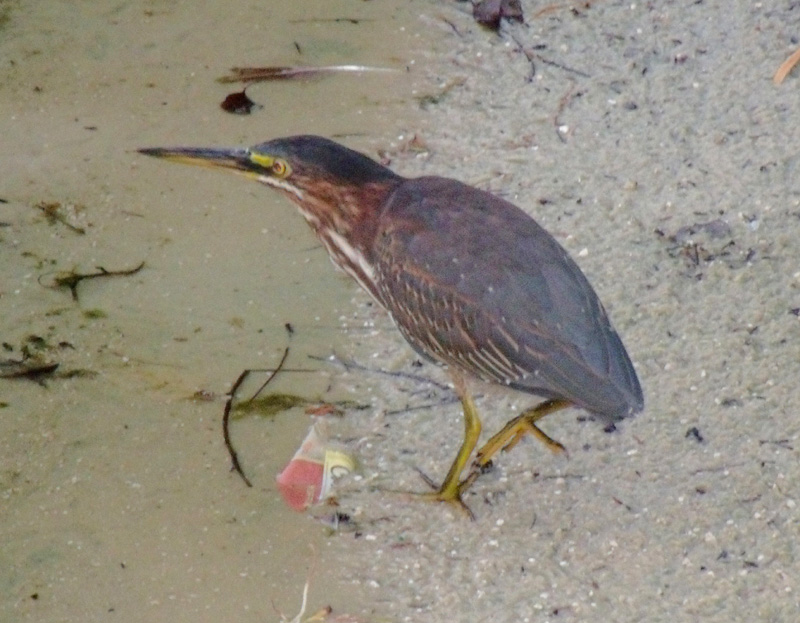 Vultures are common at Disney. They can be seen by the dozens on the Safari ride at Animal Kingdom; roosting on Discovery Island across from Bay Lake and Contemporary Resorts; or soaring in large kettles anywhere overhead. There are two species; Turkey Vultures and Black Vultures.

The Osprey can be found year-round, numbers increase in winter. They will hunt the lakes and ponds looking for a fish to catch.

An occasional Bald Eagle may soar overhead anywhere at any moment. We’ve seen them over head while enjoying a resort pool and sitting on a balcony of our room. 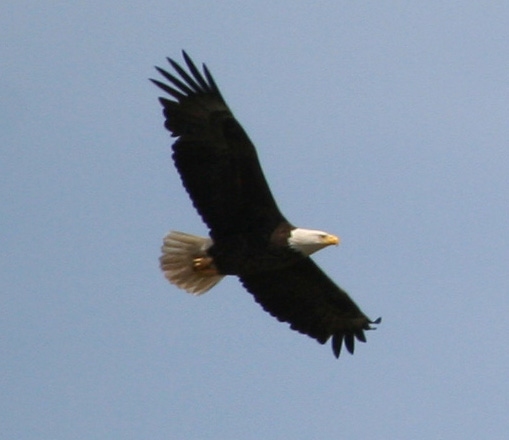 The most common hawk here is the Red-shouldered Hawk; usually seen as it flies by overhead, look for the white crescents in the wings. You might even find them hunting in savannahs at the Animal Kingdom Lodge.

The Common Gallinule and the American Coot are odd aquatic chicken like birds that can be very common near resort ponds and the World Showcase at Epcot.

The Limpkin is a species that is usually only found in one state, Florida; and is sought after by bird watchers. They have increased in recent years and can sometimes be encountered along the walkways of Disney Springs, Saratoga Springs Resort and even the Epcot resort area. 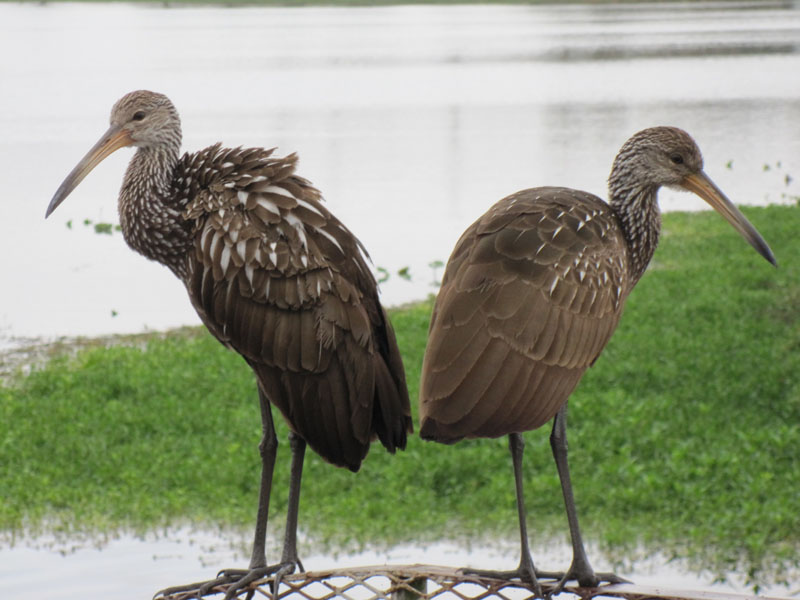 Another tall slender bird, most often briefly seen from the bus or car along the grassy areas of Disney roads is the Sandhill Crane.

The Killdeer is usually the only shorebird you might encounter on Disney property.

Most people use the term “seagull”. But there is no such species called a seagull. There are over two dozen types (species) of gull found in North America; but the only one you are likely to see is the Ring-billed Gull. It is found in the colder months from November to May and are absent during the summer. Look for them soaring around World Showcase Lagoon. These birds can be very aggressive, just as they are at beaches, boardwalks and shopping mall lots in other parts of the US. They might fly by and snatch a piece of food; found unattended or from one's hand.

Ring-billed Gull in the Magic Kingdom

The Mourning Dove is frequently encountered at resorts and are noticed when their wings make a whistling sound as they leap into the air and fly away.

In the wooded areas around resorts look for these:

Purple Martins nest “condo style” There are multi cavity boxes at Epcot, Animal Kingdom, and the path from the Treehouse Villas to Disney Sprngs. They nest between late February and June.

There are two crow species which look identical. The only way to tell them apart is by voice. The American Crow gives a good honest “caw”. The more common Fish Crow gives a nasal “caw”, frequently twice, as if it is saying no “uh’uh”.

The Northern Mockingbird is a grayish bird with flashes of white in the wing and tail when it flies. It mimics other bird songs; repeating them 3 or 4 times before changing to another song.

In the winter months Disney is visited by two northern warblers, The Yellow-rumped Warbler and the Palm Warbler. The Palm Warbler can be very bold hopping along pathways in Epcot and Disney Springs, bobbing its tail, or perched along a low fence line.

Blackbirds can be common and bold in the parks. Both Common Grackle and Boat-tailed Grackle can be found. The larger Boat-tailed Grackle is boldest and will visit outdoor eating areas and baby carriage parking areas searching for food. This species is sexually dimorphic, males and females look different. Males are shiny black with huge long tails. Females are brownish and fearless. The Common Grackle is smaller and males and female look similar, being all iridescent black.

I hope this helps you enjoy your visits to Disney. Other species can also be found. For these consult a good field guide for North American birds. I'd be also happy to try and identify any bird photo from Disney if you need help. Just email me your pictures